A Pit Bull was recently found in a very advanced state of neglect. The dog, named Cala, was under the care of a mechanic near San Jose, Costa Rica. A chain around her neck kept the poor girl from resting her head. In addition, she rarely ate and wasn’t taken to the vet after she got sick.

Cala’s health grew worse and she struggled to keep her head up. If the help didn’t come quickly, the Pit Bull would die.

Fortunately, some neighbors contacted the local police as well as the staff of the Territorio de Zaguates.

Luckily, Cala was removed from the property and taken to the vet, where she received immediate treatment. Then the loving dog was moved to the Territorio de Zaguates, to recover physically and emotionally. 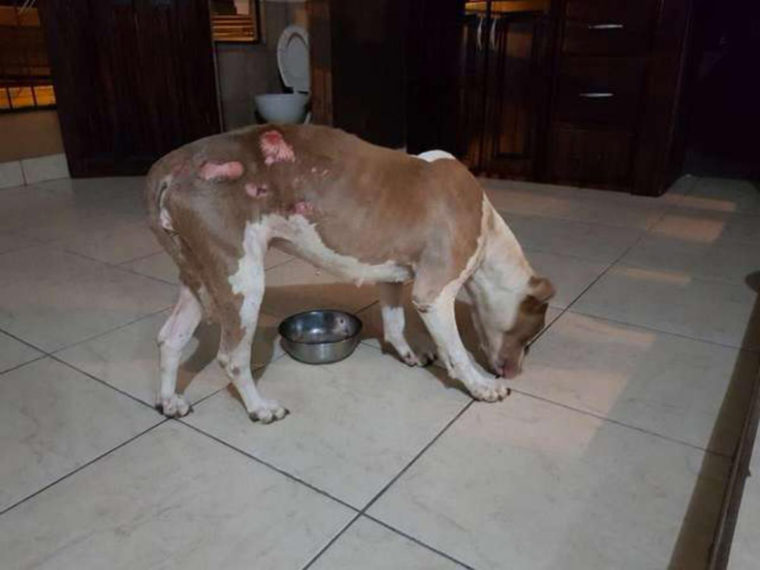 At first, Pit Bull did not like the other animals in the sanctuary, which led Battle to believe that Cala had been trained to attack. However, over time, the beautiful girl began to trust the other dogs and the people around her.

Cala’s fight did not end there

In June, some people sneaked into the sanctuary and put on sausages with poison, killing 16 dogs. Cala had also eaten a sausage, but somehow she survived. She’s a fighter!

After that, Cala was moved to a foster home, where she is being greeted with much love and affection. “She’s happy and spoiled by her adoptive mother,” Battle said.

Battle has rescued countless dogs in his life, but Cala’s story is particularly special. “This rescue is an epic battle of good against bad and of hate against love, and in the end, as it always does, love wins,” Battle said.

Fortunately, it turned out all well for this loving little dog… Share this incredible transformation with your friends and family!